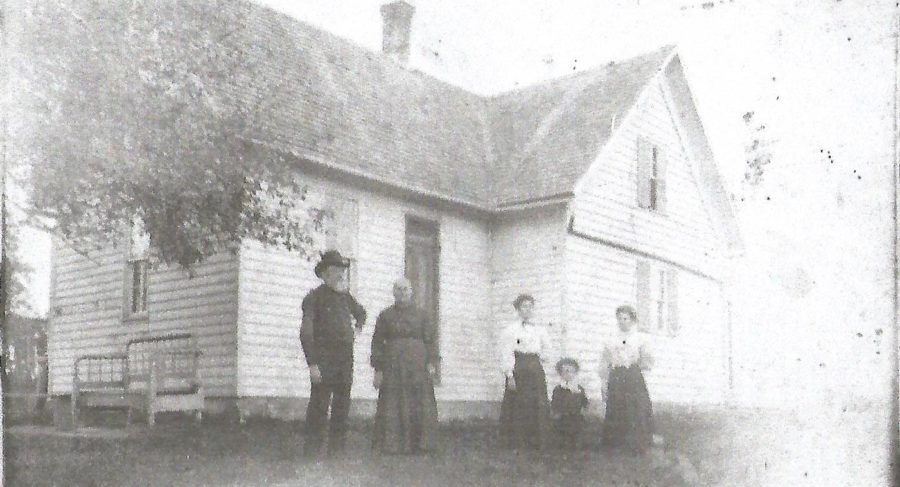 Joseph Eifert was the son of Michael Eifert, a German immigrant. He was born in Knox County, Ohio and died in Mercer County, Ohio. He married Sophia Weis and was the father of eight children.

Little is known about Joseph Eifert’s childhood. He was born in Knox County, Ohio two years after his parents’ arrival in the U.S. His confirmation is recorded in the records of St. Luke in Danville, Ohio on Sept. 20, 1853. He was confirmed by Archbishop Purcell of Cincinnati.

In 1860, the Eiferts moved from Knox County to Mercer County. Specifically, they moved to an area near St. Joseph, also called Victoria at one point in time.

Joseph purchased 40 acres of land east of St. Joseph church. The land was totally wooded, and the land needed to be cleared before farming. However, Joseph had to earn a living in the meantime. So he worked as a carpenter or mason building St. Augustine Church in Minster, Ohio.

Minster is about 20 miles away from St. Joseph. On Monday morning, Joseph would walk all the way to Minster for work. He would walk the 20 miles back on Saturday. [1] He built a two-room cabin on his land in Mercer County, and later a home that still stands today.

During the Civil War, Joseph was drafted into the Union Army. He was called to Lima to report for duty, so naturally he traveled the 50 miles on foot. By the time he made it to Lima, Joseph had suffered what appeared to be a heart attack. The illness made him unfit for service, so he was rejected and walked 50 miles back! [2]

Joseph Eifert’s farmstead continued to grow, changing hands within the family along the way. Farming became very difficult in the 1960s, and today all but the house is gone.

Joseph Eifert married Sophia Weis, and together they had eight children, pictured with their spouses below. Not included was Mary C. Eifert, who became a nun with the Sisters of the Precious Blood.

Joseph Eifert is the common ancestor of many Eiferts in Ohio, Kentucky and Indiana. Yet it appears that they stayed in contact since a large family reunion was held at the old homestead in the early 1900s. Here we see his children again, but also his many grandchildren!