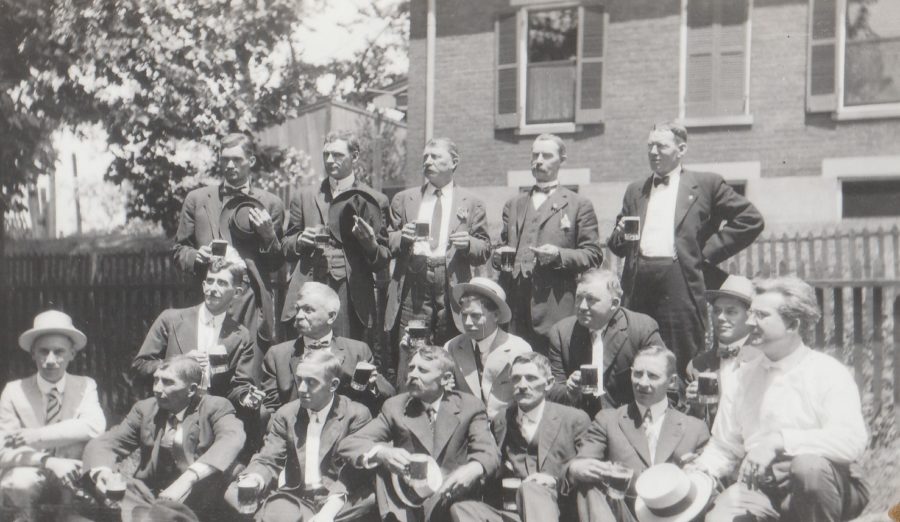 The son of Joseph Eifert and Sophia Weis Eifert, Sylvester Victor Eifert was born in St. Joseph, Ohio. He was a long-time organist at St. Aloysius Catholic Church in Covington, Kentucky.

Sylvester Eifert was the youngest of eight children born to Joseph and Sophia Eifert in Mercer County Ohio. They lived on farmland that Sylvester’s father had purchased in 1860 when the Eifert family moved to St. Joseph from Knox County.

At age 13, Sylvester was introduced to the organ. His older brother Aloys was an organist and teacher at schools in Maria Stein and St. Joseph. Aloys taught his younger brother on a reed organ in the family’s home. After four or five lessons Aloys said, “You’re fine now. You can now play my wedding!” [1]

His future as a musician, however, was placed in jeopardy when Sylvester fell out of a hay loft. Both of his wrists were fractured, resulting in scars that he carried his whole life. For an aspiring organist, such an injury must have been awful, but Sylvester recovered and continued playing.

As his brother foresaw Sylvester indeed played at his elder brother’s wedding mass at 16 years old, and by some accounts this was the first time that he played at mass.

In 1898, when he was 18 years old, Sylvester attended Pio Nono College and Normal School in St. Francis, Wisconsin. This was the same school his brother Aloys had earlier attended.

Pio Nono College was named after Pope Pius IX, who was the pope in 1870 when the school’s cornerstone was laid. In 1873, Johann Baptist Singenberger arrived from Switzerland and took charge of the music program at the school.[2] Singenberger, a teacher and composer, is considered by many to be one of the most influential men in the history of American Catholic church music.

Such was the quality of education that Aloys and Sylvester Eifert received. Records from the school indicate only that Sylvester attended the 1898-1899 term, and that he played the Second Spanish Soldier in the school’s production of “The Malediction,” a drama in three acts.

It’s unclear how Sylvester moved from his schooling to Alvada, Ohio. It may have been that he found work as an organist here. Regardless, this is where he met his wife, Catherine Thines.

Sylvester Eifert and Catherine Thines were married on the 13th of July, 1903 at St. Peter in Alvada.

In May of 1904, Sylvester and Catherine welcomed their first child into the world. Philemon R. Eifert was born in Alvada, Ohio.

Sylvester may have played the organ both at St. Peter in Alvada and St. John the Baptist in Landeck, which was Catherine’s hometown. Sam Bonifas, a historian in Landeck, noted that Sylvester taught at the Rahrig School, a one room schoolhouse that still stands today.

It was not long, however, before the newlyweds left for Indiana.

A September 1906 article in The Herald of Jasper, Indiana reported that Sylvester V. Eifert had taken charge of the school at St. Ferdinand, and that he, “played the organ for high mass and acquitted himself ably.”

Two of the Sylvester and Catherine’s children were born in Ferdinand. Cleophas Eifert was born on August 30, 1906. And on February 6, 1908, their first daughter, Valeria arrived.

The Professor in Covington

By 1908, Sylvester and his family had moved to Bakewell St. in Covington, Kentucky. He was now the organist at St. Aloysius, the city’s largest parish at 4,000 members.[3]

For many years, Sylvester played two masses per day and three on Sundays. He walked two blocks to the church to play, and on snowy days his grandsons were tasked with shoveling snow out of his way as he walked.

Sylvester took over the 11-person choir and increased membership to 35 in time for Christmas 1908. While playing for mass and organizing the church choir, Sylvester also gave lessons on instruments ranging from the xylophone to the organ.

The choir became a vibrant social group as well. Members gathered at the Eifert house for summer picnics and other parties. Sylvester and members of the choir would enjoy a beer or two after practice, as my father Paul Eifert recalls.

Sylvester’s children were given a musical education as well. Both his children and grandchildren learned to sing and play instruments. In a 1919 photo of Professor Eifert’s orchestra at St. Aloysius School, all but one of his children are pictured playing instruments.[4]

In the family it is well known that the descendants of Aloys and Sylvester Eifert are musically inclined, both as singers and as players of various instruments.

Two more daughters were born to Sylvester and Catherine. On Aug 11, 1911 Rowena Eifert was born in Covington. And in December of 1915, the family welcomed Melania Eifert.

For many years the Eifert family lived at 717 Dalton Street. His son Clay eventually moved to 723 Dalton, and his cousin Roman’s family lived next door!

Sylvester Eifert was no stranger to tragedy. In January of 1913, his three year-old son Sylvester Jr. died from diphtheria. In 1941, his wife Catherine dies unexpectedly. In 1946 his son Clay, a Covington police officer, was murdered when responding to a domestic call. In 1954 his daughter Valeria, who he still lived with, died at 46 years old.[5]

In the same year that his daughter Valeria died, Sylvester Eifert retired from playing the organ at St. Aloysius, and moved to Dayton, Ohio where he lived with his song, Phil. A year later, he died.

Sylvester Eifert’s obituary in The Cincinnati Enquirer captures the community’s appreciation for him.

There at 9 a.m. many of his friends will attend the Solemn Requiem High Mass. And a very old friend with its rich and glorious voice, will bid farewell to the maestro who in 54 years had played so many requiem masses for others. It is the great pipe organ of St. Aloysius Church, his almost daily companion for nearly half a century.

And who shall say that the massive instrument ever gave forth sweeter tones than in saying “Goodbye and God rest you” to Professor Eifert? [6]

Do you have a story about Sylvester?

I am always looking for new stories, records, photos or other information regarding our ancestors. If you know something about Sylvester Eifert, contact me so that I can add it to this history.