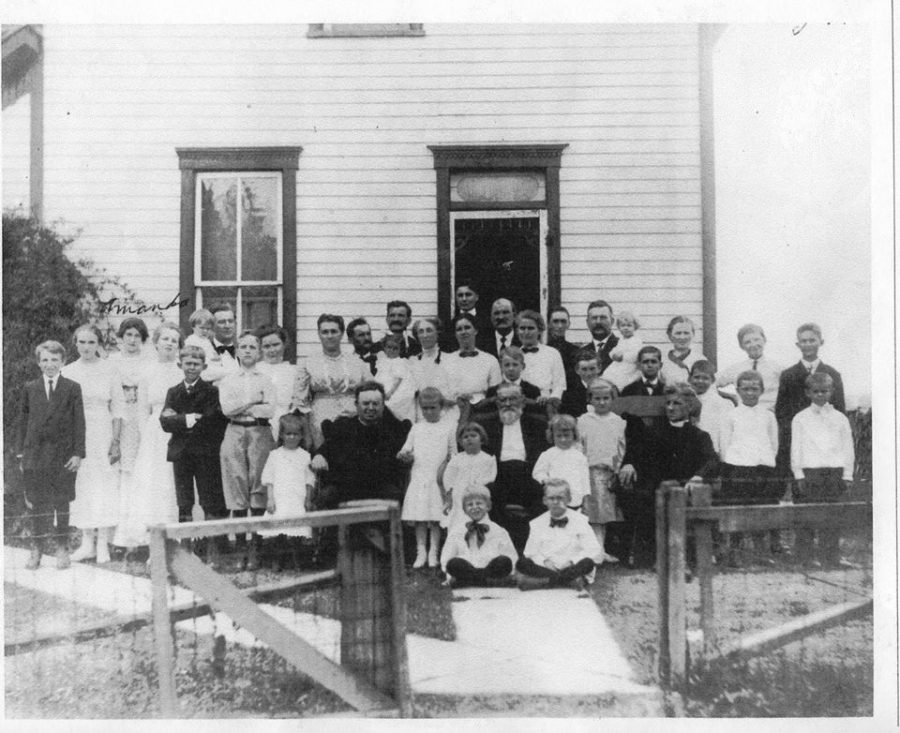 Around 1860, Michael Eifert and his sons, Joseph and Victor, purchased land in Mercer County, Ohio. They were part of a large westward movement of German immigrants likely seeking better land, freedom from anti-Catholicism and the ability to give their children a Catholic education.

Michael, 60 years old at the time, would live only 8 more years after he and his sons purchased land in St. Joseph. But that modest church, still standing today amidst gently rolling cornfields, would be the home for many Eiferts. And Eiferts remain in the area to this day.

In this article I hope to give you some context about the early life of the St. Joseph Eiferts, along with some background on the other families that lived there with them.

According to the St. Joseph Parish History, the first German settlers arrived in the area around Ft. Recovery in 1830. Less than 40 years earlier, General Mad Anthony Wayne had built Ft. Recovery as part of his campaign to drive hostile Native Americans out of the area. Ohio was the frontier of the nation, and all lands west were sparsely.

The first families at St. Joseph faced many challenges. The land heavily wooded. To farm it, they’d have to cut down and clear many acres. Land in the area was also swampy, a problem both because it needed to be drained to farm it and it was a breeding ground for millions of mosquitoes that carried disease.

Illness was a terrible problem. Typhoid fever, cholera and smallpox ravaged the settlers. Of the first hundred deaths recorded at the parish, half were children who had not yet reached the age of six. It’s little wonder then, that there was a special devotion among the community to St. Roch, who was celebrated for helping those dying of plague.

St. Joseph Parish History gives us some information about “Centennial Families” those who they celebrate as founders of the community:

Joseph Doll, the family patriarch, came from Oensbach in Baden. We do not know when he arrived in America, but he lived for a time in Perry County, Ohio, because one of his sons was baptized there in 1836. The Dolls possibly lived there a number of years, for they had to have considerable means to buy up 800 acres of land in Mercer County the following year.

The Doll family provided the land of St. Joseph. This history also suggests that the Doll family’s influence extended back to Perry County, where they attended the first Catholic church in the state (also St. Joseph).

History of St. Joseph Parish suggests that the Weises may have been the very first German settlers in St. Joseph. The history states, “John Nicholas Weis and his family, the youngest being eight years old, came directly from Baden between 1830 and 1834.”

John Weis’s granddaughter, Sophia Weis, would later marry Joseph Eifert. That marriage was the beginning of a long line of Eiferts that today live predominantly in Fort Wayne, IN, Dayton, OH, and Covington, KY.

The St. Joseph parish history identifies “century families,” those that either settled St. Joseph or were foundational families of the parish. Eiferts from St. Joseph are likely related to several of these families by marriage.

This suggests a couple of things. The Eiferts may have known some of these families prior to emigrating to the U.S. They may have also met up with these families in Perry and/or Knox county, which would later influence their move west.

History of St. Joseph Parish features this mention about the origins of the Eifert family:

Closely associated with the Harletts were the Eiferts. Michael Eifert and his wife, Elizabeth, came from Knox County and bought the farm which has been in the Eifert family ever since, namely, their son Joseph, their grandson Jacob, and their great grandson, Ferd Eifert. Both the Eiferts and the Harletts originally came from Baden and brought the carpenter trade with them.

The Eiferts purchased land in Mercer County, but the land was heavily wooded and clearing it took much time and effort. To support his family, Joseph put his carpentry trade to use in the construction of St. Augustine Church in Minster. An article in Northern Kentucky Heritage describes how Joseph walked the 20 miles to Minster on Monday, and returned home on Saturday.

Of Nicholas and Catherine (Eifert) Harlett, the history notes:

Nicholas and Catherine (Eifert) Harlett moved to St. Joe from Knox County shortly after 1860. They purchased their farm from a “Yankee” by the name of Daniel Jones, who had already made a few improvements through his renter. The Harletts brought their father, Nicholas Sr., with them, and he later lived in a quasi-hermitical life in the abandoned log school at the corner of their farm.

The Northern Kentucky Heritage article suggests that it may have been Catherine’s marriage and move to St. Joseph that uprooted the rest of the family from Knox County.

Many Eiferts left St. Joseph for opportunity elsewhere. Those Eiferts moved throughout Ohio, in Kentucky, Minnesota, and as far away as California. Others remained, and still today the Eifert name is carried on in Mercer County. In fact, it was only until somewhat recently that Eifert’s didn’t own the original homestead.

A Commitment to Faith

There is every indication that the families of St. Joseph were very devout in their Catholic faith. In fact, it may have been the reason that the Eiferts moved west to begin with.

We don’t have a documented reason for the move from Knox County. However, there is a quote from Ferdinand Kunkel, another “Centenial Family” about why they moved.

Ferdinand spent ten years as a day laborer there and then decided to come to Mercer County. Why? Because he could at least rent a farm here. Land in Knox County was hilly and unattractive. But besides this, “I liked it there (Knox County), but we had not a single German-Catholic school.” The 1850s witnessed a strong wave of anti-Catholicism and anti-foreignism, and he wanted to protect both the religion and the language of his family, a thing which many felt belonged together.

For Eiferts who have not yet visited the Fort Recovery area, it is a truly special place. It has been nicknamed “the land of the cross-tipped steeples.” Nearly every square mile there is a Catholic church, built in similar styles. Driving down one of the country roads in Mercer County, the steeples dot the sky all the way to the horizon.

My wife and I visited St. Joseph in 2016. At the time, the pastor at St. Augustine (Covington), Fr. Dorn, had been a pastor there once. When planning our visit to the church, I asked Fr. Dorn if the church was locked or had open hours, something any city-dweller is used to. He laughed and mentioned that during his tenure at St. Joseph, he wasn’t even sure if there was a key available to lock the church.

The area around the church is very serene, and mostly agricultural. It was interesting to think that not much had changed around St. Joseph since our ancestors began farming there.

Can you add to this story?